After a baby enters into your world and your house, you start preparing for the new life which involves multiple decision makings.  You will always have to put the safety of the baby first and also think about how to make life easier and manageable for the parents as well. One of the major concerns is how to make best use of the time when you baby is sleeping. Those precious hours are a blessing for any parent but parenting never takes a pause. Buying ​a baby monitor for two rooms is the next best thing that will solve this dilemma and will most definitely make your life easier. Since you need to monitor your baby while he’s sleeping in his nursery and you also need to make the best use of that time either finishing tons of leftover work or even when you just want to have a peaceful evening with your spouse while the baby takes a nap. 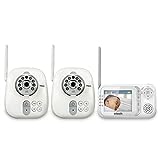 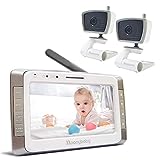 When it comes to a bigger house with multiple rooms, or when your family grows and welcomes the second child, you feel the need to monitor two babies (the infant and the toddler) simultaneously or when both of the parents are working in separate rooms and want to share the monitoring duties of a single baby, baby video monitor for two rooms can be bought to solve this two pronged scenario.

Baby monitors for two rooms are mainly of two types:

Two Base Units (Transmitters) And a Single Receiver

This type of baby video monitor consists of two separate baby units or transmitters for two separate baby rooms (e.g. one for infant baby room and the other for toddler room) and a single receiver that shows real time coverage of both the rooms on a single screen using the split screen function. This type of baby monitor is best for parents with two children who sleep in two different rooms.

One Base Unit (Transmitter) And Two Receivers

This type of baby monitor has a single base unit or transmitter with two separate receivers that shows real time coverage of the same room at the same time. Parents who want to monitor their child from two different rooms without having to move the receiver from one place to another, or for parents who are in two separate rooms and want to share baby monitoring duties while they do their work should buy this kind of baby monitor.

Features to Look For

Nowadays, baby monitors for two rooms come with exciting new features that may add to the convenience and ease of the parents during the baby monitoring hours. The following list will help the parents to decide which kind of baby monitors are best for their families and which extra features to consider for while making this life changing investment.

Baby Monitors come in two forms. The ones which just allow for audio monitoring of the baby and the ones which displays real time video of inside the baby room on an LCD display of the receiver unit. The video monitoring is obviously more expensive but adds to the satisfaction of the parenting duties.

Most of baby monitors come with infrared night vision so that the camera lens can also capture the inside of the room even when the lights have been switched off, without deteriorating the ​video quality. This helps in monitoring of the baby at night when they are sleeping in the dark.

Baby monitors come in both digital and analog forms depending on the type of signal they transmit. Although digital baby units are more on the pricey side, they sure help in sending a much clearer video image and sound quality while also help by being more secure against interference of signal by other gadget or monitor devices in the neighborhood.

Two-way talk mode is available in most of the baby monitors now which helps in soothing the baby or a toddler with the voice of the parent when they talk through the monitor. Some baby monitors also come with pre-recorded lullabies or poems installed in their systems that can be played by the parent from the receiver end.

Baby Monitors for two rooms should have a bigger range in order to function accurately from a distance. Monitors with bigger ranges help in transmitting high quality audio and video without any distortion. So you should buy a baby monitor whose range matches the size of your house and distances between the room.

Parents find it quite useful when baby monitors have temperature sensors and can display the temperature of the room in which the baby/toddler is sleeping.

Some baby monitors come with light indications or vibration sensors/indicators for deaf parents or when listening to loud music you cannot hear the sound of the baby but instead can see the light blinking on the receiver.

Parents who need to monitor their children or a baby sitter’s performance from a remote location should buy baby monitors that are equipped with remote control feature so that they can always stay connected to their house and their child even on the go.

Most of the baby monitors allow for camera lens movements that are controlled by the parents from the receiver unit. When they want to get a better picture of the room, the parents can pan/tilt or zoom the camera lens according to their needs and get a satisfying look of their baby while sitting in the comfort of their chair.